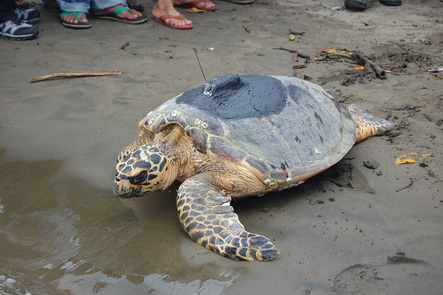 Hawksbill (Eretmochelys imbricata) marine turtle populations have been greatly reduced around the world. Nowhere is this more apparent than in the eastern Pacific Ocean, where hawksbills are facing threat of regional extirpation. Nesting and foraging by the species was largely undocumented in the region until 2008, when research efforts resulted in the identification of several important nesting rookeries and foraging hotspots. This has, in turn, offered new opportunities for research. Despite an improved conservation outlook, fundamental information on the migratory ecology, habitat use and dive behaviors are lacking.

Our spatial ecology research uses satellite telemetry technology to characterize and determine movement behaviors of hawksbill turtles tagged at nesting and foraging sites along the Pacific Coast of Mexico, El Salvador, Nicaragua and Ecuador. The data generated via this program has provided unique biological information central to effectively managing and recovering this ecologically important species in the eastern Pacific.