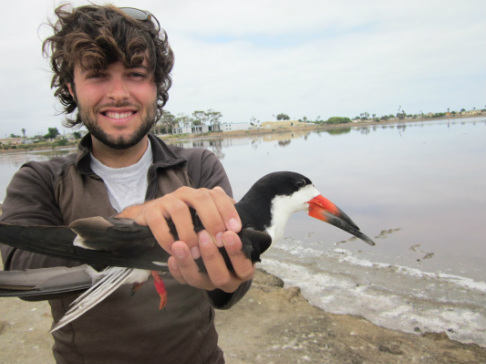 I've always been amazed and inspired by the biological diversity of our planet - about the countless living things in our backyard and beyond. Conservation and coastal ecology have been integral parts of my life for as long as I can remember. Mainly, I attribute this ethic to my hometown's Crane Beach, a 5-mile undeveloped barrier beach, salt marsh, and wildlife refuge in Ipswich, Massachusetts.

It was Crane Beach where I returned to work with nesting Piping plovers and Least terns for three summers throughout college. I had never paid much attention to birds before this, but it was here where I found my niche in the field of wildlife biology. Since those formative summers, I've worked with ants, aquatic insects, salmon, green and Olive Ridley turtles, Marbled murrelets, science teaching, volunteer coordination, and environmental education. Although my research and professional experiences have varied somewhat over the years, they are all linked through the interdisciplinary field of conservation ecology.

Increased anthropogenic disturbance in and around San Diego Bay has led to large accumulations of contaminated urban runoff. Known, persistent organic pollutants (POPs) – including organohalogen compounds, DDT, and flame-retardants (PBDEs) – have been extensively studied and are known to bioaccumulate, causing reproductive impairments and detrimental effects to birds and other wildlife. An emerging area of ecotoxicological research focuses on analyzing bioaccumulative "unknown" compounds (emerging, unregulated, naturally-produced) that structurally resemble known POPs and may have similar negative impacts.

Numerous studies have highlighted the utility of using aquatic birds as indicators of ecosystem health. San Diego Bay hosts the largest western colony of black skimmers (Rynchops niger), with approximately 350 breeding pairs. Yet, while colony size has held steady and even increased over the years, reproductive output has remained relatively low. Initial studies both locally and nationally have provided evidence that black skimmers accumulate contaminants in higher amounts than other seabirds species with which they associate (Burger 2002). As strict fish-eaters located higher on the food chain, skimmers may be at an increased risk of accumulating harmful environmental contaminants and serve as robust indicators of coastal environmental health.

Working in collaboration with Dr. Eunha Hoh in SDSU's Graduate School of Public Health and the US Fish & Wildlife Service, this project seeks to identify and measure the both known and unknown contaminants present in skimmer blood and eggs, and how these contaminants may affect their reproduction (egg viability). Furthermore, this study will provide a contaminant inventory of both known and previously unknown chemical compounds in the California Bight.