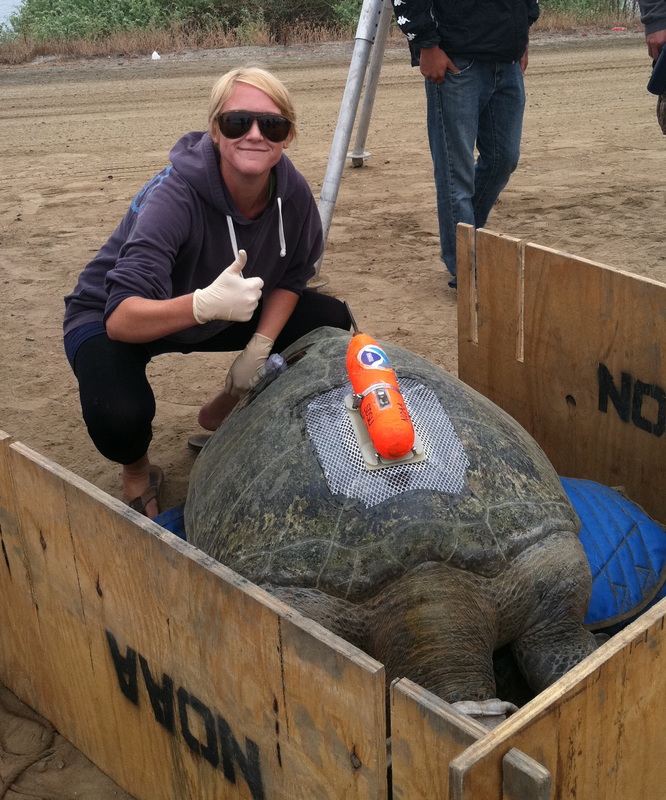 I grew up in Berwyn, Pennsylvania, a suburb of Philadelphia, but spent my summers at the beaches of Ocean City, New Jersey and Cape Hatteras, North Carolina. During these summers I developed a deep love for the ocean and its inhabitants, declaring at a young age that I would be a marine biologist one day. Well, as it turns out, I am actually en route to becoming a marine ecologist (minor detail).

Marine turtles, in particular, have captivated my attention for as long as I can remember. But it was during my freshman year at the University of Vermont where I became aware of the impressive movements and migrations of marine turtle species. The one challenge was gaining research experience with marine turtles while completing my degree in Vermont; apparently there are no marine turtles in Lake Champlain...Nonetheless, I persisted and gained laboratory research experience looking at mammary gland development in fetal pigs supplemented by a summer internship tagging loggerhead sea turtles in Cape San Blas, Florida. My undergraduate advisor, Dr. Russ Hovey, often reminding me that sea turtles DO NOT, in fact, have mammary glands.

I went on to complete a Master of Science degree in the Biological Science department at Florida Atlantic University (FAU) in Boca Raton, Florida working with Drs. Michael Salmon and Jeanette Wyneken. Through their guidance, I feel I truly gained insight in what it takes to "make it" as a scientist. And through hurricanes Katrina, Rita, and Wilma I experienced the trials and tribulations of relying on nature to cooperate with scientific research.

Upon completion of my MS degree, I took a position as Biological Science Technician in Flagstaff, Arizona working with Dr. Jeffrey Lovich. During this time I worked on a population study of Sonora mud turtles (Kinosternon sonoriense) at Montezuma Well, Yavapai County, Arizona and a population study of desert tortoises (Gopherus agassizii) at the Mesa Wind Park, Riverside County, California. Through these research experiences, I solidified my goal to continue with my graduate studies and attain a doctoral degree somewhere in the biological sciences.

The decision to apply with Dr. Rebecca Lewison was a natural one given the conservation focus of her research and after having heard her speak while I was a graduate student at FAU. In addition to working with Dr. Lewison, I have the pleasure of also working with Drs. Jeffrey Seminoff and Tomo Eguchi from NOAA's Southwest Fisheries Science Center. With our powers combined, I am studying movement and thermoregulatory behavior of a small population of Eastern Pacific Green Turtles (EPGT) in San Diego Bay, San Diego, California. 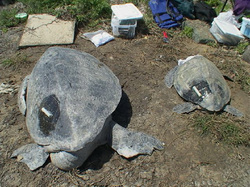 Turtles with sonic tags. NMFS Permit #1951.
Green sea turtles (Chelonia mydas) have inhabited San Diego Bay since the mid-late 1800s and have been routinely observed in the SBPP outfall area since the 1960s (Stinson 1984, McDonald and Dutton 1990). During its operation, the South Bay Power Plant (SBPP) in Chula Vista, California discharged warm-water effluent into San Diego Bay in an area designated as a unit of the San Diego National Wildlife Refuge called South Bay. Turtles likely utilized the outfall area to take advantage of the significantly warmer water for thermoregulatory purposes. On December 31, 2009, two of the plant’s four generators permanently shut down; complete decommission of SBPP occurred on December 31, 2010. Closure of the SBPP has removed this non-natural source of warm water, often referred to as the “Jacuzzi,” and bodes the question of how green turtle movement and behavior in the Bay will change.

Since 2009, I have been tracking the local movements of green turtles in San Diego Bay through a collaborative effort with the NOAA Southwest Fisheries Science Center, the United States Navy, and the Port of San Diego. Green turtle movement is monitored using a combination of passive and active acoustic telemetry. The data collected via acoustic telemetry provides information with regard to how green turtles utilize the horizontal plane of their habitat. To monitor green turtle movement in the vertical plane, I am using archival time-depth recorder (TDR) tags (see photo above). A TDR is temporarily mounted to the carapace of a green turtle to monitor the dive behavior of the turtle. Upon release from the animal, the TDR is collected and data retrieved from the tag. All tagging and tracking of green turtles in San Diego Bay is consistent with methods approved by the National Marine Fisheries Service (permit #1591) and the San Diego State University Animal Care and Use Program/IACUC.