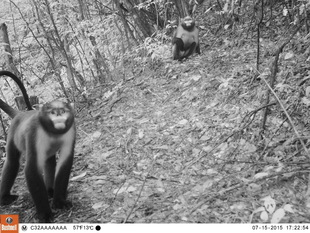 Do Payments For Ecosystem Services Programs Promote Wildlife Conservation? ​
Human activities have led to habitat degradation and loss of biodiversity worldwide. In response, a land management approach called payments for ecosystem services (PES) has been implemented by governments, the private sector, and non­-governmental organizations. Yet, monitoring of ecological outcomes of PES programs, such as increases in wildlife biodiversity, remains limited. I ask whether an endangered, endemic Guizhou snub­ nosed monkey (Rhinopithecus brelichi), the flagship species in Fanjingshan National Nature Reserve, China can serve as an indicator of the effects of PES on wildlife biodiversity. I use camera trapping and occupancy modeling combined with remote sensing images to investigate the responses of R. brelichi and other mammals to human activity and environmental characteristics that can be directly influenced by PES. The study will inform how effective PES programs are in conservation of critically endangered and threatened wildlife species. This project will directly contribute to the conservation of R. brelichi; promote the science of PES, and monitor wildlife biodiversity in a high elevation​ biodiversity hotspot. The results will fill several critical knowledge gaps related to distribution and habitat use of R. brelichi, and other wildlife species of conservation concern in FNNR. This research will also help characterize how R. brelichi respond to human disturbance in the context of a PES program and whether at FNNR, wildlife biodiversity has benefited in response to the policy. The study will also provide a practical way to monitor and assess effects of PES on environment and wildlife, with lessons for other PES programs worldwide.